A WORLD War One British prisoner of war from West Thurrock has been honoured in a special memorial service 101 years after his death.

On Thursday 27 June, tributes were made at West Thurrock Cemetery for Pte Howarth and other fallen service men and women from Thurrock during the First World War. The service was the result of a Full Council question put forward on Wednesday 25 July 2018, by local resident Mr Peter Perrin, who had researched Pte Howarth’s story extensively.

A plaque and memorial tree dedicated to Pte Howarth and World War One soldiers was unveiled during the ceremony. Poppy wreaths were also laid on behalf of all officers of the council, alongside others from local branches of the Royal British Legion and flowers from Pte Howarth’s family.

Carol Johnston and Joanne Sibthorpe, great nieces of Pte Howarth, said: “It was lovely for him to be remembered and honoured.” 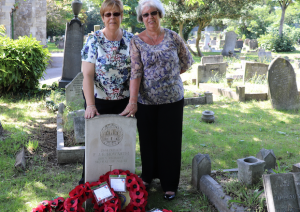 Leader of the Council, Cllr Rob Gledhill, said: “Yesterday we remembered and paid tribute to Pte Howarth. Like millions of others at the time, this strong, healthy, young man put himself forward to defend the way of life of those back home, his fellow soldiers and the rest of the world.

“After being taken prisoner, he refused to work to help the enemy’s war effort and was punished unmercifully for it. Despite being told he would be unlikely to survive the journey home, he showed more of the determination he had shown as a prisoner and returned home, only to die from the wounds inflicted on him.

“It is unthinkable to comprehend what life could have been like if Pte Howarth and the millions of others who had the bravery and courage to serve King and country.” 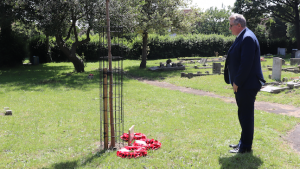