Metal’s tenth edition of Village Green, the much-loved family-friendly festival, takes place in Chalkwell Park on 13 July 2019 from 11am until 9pm – ten hours of arts, music and performance for all ages. 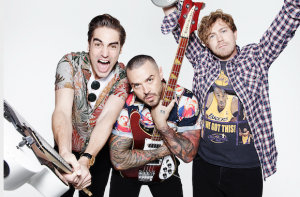 Southend’s very own BUSTED – James Bourne, Charlie Simpson and Matt Willis – are the festival headliners. Fresh from their sell-out arena tour which culminated at London’s prestigious Wembley Arena, and with a new album out, Busted make a first appearance at Village Green and will close the festival on the main stage as the sun goes down.

New York’s finest, Fun Lovin’ Criminals, will also step out on to the Village Green stage to share their eclectic mix of funk, jazz and blues. Whip-smart originators and incomparable live performers, the trio will be the perfect ice-cool cocktail to continue the party spirit in the evening.

The Oak Stage this year has been designed and programmed for young performers by young people who will also run the stage on 13 July. It will offer all kinds of musical genres and performances from duos, bands and solo singers. It was on this stage in 2017, that Ruti made her first appearance at Village Green.

Blow Up founder Paul Tunkin plays the Idea 13 stage, spinning sounds from Blow Up alongside tracks from his earlier Southend clubs: the Monkey House, Wasp Factory and the Periphery. Also on the Idea 13 stage, long established, local digital radio station Ship Full of Bombs will showcase the female DJs who present shows on the station. Presenters from new community station Ray Radio will be stepping up to the decks too. The live performances on the Idea 13 stage have been programmed by a panel of music industry professionals.
Southend’s SoSlam music collective present an invited selection of artists from their songwriters club and other prominent musicians on the local open mic scene to busk on the new SoSlam Busking Stage sited in the middle of the Bearded Gypsy marketplace.
TwoTwelveTens Record shop (sponsored by Silent Disco) present an exciting new outdoor dance event, including a Silent Disco for young people and families, plus exciting sets from regional and national DJs playing all genres of music. Grab a set of headphones, choose your channel and get dancing. All ages welcome on the dancefloor.

Alongside the top quality music that festival goers have come to associate with Village Green, there will be even more family-friendly activities. These will include a theatre tent, spoken word and storytelling tent, silent disco and Mini Green stage. There will also be more alternative art for adults ranging from visual artists, alternative fashion, an arts and craft market with 75 local artisans. Delicious food stalls offer food from around the world!

The popular Artist Village returns: this is a programme of new contemporary artworks created especially for the festival and Chalkwell Park. Organised by Jon Kipps, an artist/curator from Southend, a group of four artists: Chloe Brooks, Ali Eisa, Brian Griffiths and Milly Peck have been invited to exhibit. Festival goers will be able to discover their artworks, inspired by time spent in Southend, around the Park at Village Green and for a month after the festival.

Global Village the Global Village stage will ring to the sound of music from around the world and always gets festival goers on their feet to dance.

Southend based theatre group, N-Act will capture the imagination of all festival-goers. They will be recreating the much-loved Chalkwell Beach Theatre from the 1950s and will have a huge variety of performances, all of which will have a particular focus on young people.

The Jacqson Diego stage will host children’s favourites Pip and Posy and The Wimpy Kid Show. Alex Scheffler’s tales of Pip and Posy are much loved by all the family. The Wimpy Kid Show brings to life Jeff Kinney’s mis-adventures of Greg Heffley which have been successfully translated to film and are now a live show. Other authors taking part in Jacqson Diego Story Emporium are Ellie Irving, Hollie Hughes, Justin Coe, Karl Newson and Ross Montgomery.

Spinning Yarns has gathered an unrivalled selection of tellers of tales and performers of poems to entrance festival goers of all ages and remind them of the power of the spoken word and the pleasure of listening to stories. The maverick Story Beast (alias comedian John Henry Falle) and Leigh-on-Sea’s own kooky band, The Dusty Pedlars are just two acts performing. Poet John Hegley will bring his own brand of silly sing-a-long songs and clever, unexpectedly developed poems to the Spinning Yarns stage too.

Mini Green is the dedicated area for babies and toddlers. Award winning Baby Sensory, offering a world of exciting sensory activities can be found here, with singing, dancing, light shows and puppets. Meet The Lost Leigh Goose with Wild Story Theatre or join Mrs H and the Sing-along Band in their unique and infectious blend of family music or there might be dinosaurs to discover in the swamp or trucks to drive through the snow with Buttercup Club and original stories told through physical objects, original songs and live music, can be heard from Half a String.

ForwardMotion (nb no space between d and M)
ForwardMotion is a collaboration between Essex, Southend-on-Sea and Thurrock Councils and is funded by the Department for Transport. The ‘ForwardMotion Village’ within the festival focuses on cycling, walking and public transport. There will be fun activities such as performances from Team Extreme including professional skateboarders and BMXers, static bike racing, balance bikes and a pop-up cycling track.

Here for the first time at Village Green, Metal presents Inkhead – a group of eight indie comic artists, each bringing their unique, quirky vision of the world to sunny Southend. The Inkhead tent is a continuation of Metal’s work with these brilliant artists, all of whom attended a week long Culture LAB at Metal Southend in 2018.

So much to See, Do, Hear

The Bearded Gypsy’s Trade Fayre brings together the very best artists, designers and emerging brands through a variety of events. Discover and support all things small, handmade, unique and boost the creative community in a happy environment filled with great music and great products .

Based inside Metal’s HQ – the beautiful Chalkwell Hall audiences will find music and poetry from very special guests, alongside a 90th anniversary exhibition by DECCA Records, one of the most iconic record labels in the world. Since its formation in 1929, Decca has grown from a prosperous British company to a fully-fledged international powerhouse – quickly earning the title as ‘The Supreme Record Label’. El Rey, an intimate night hosted by Jaws & The Midnight Flyer at Mojo in Leigh On Sea, will be providing a suitably lo-fi programme of guest artists and bands to compliment the exhibition.

The Jazz Centre UK hosts a Jazz Cafe in Chalkwell Park Rooms presenting live music by regional, national and international jazz stars throughout the day. It also celebrates the work of The Jazz Centre UK based in Southend’s Beecroft Gallery.

Grrrl Zine Fair tent will be full of zines, bands, workshops and discussions; a party celebrating DIY creativity with a political undercurrent that showcases creative output made particularly by woman, LGBTQI and non-binary people).

Village Green is also working towards a Silver accreditation with the charity Attitude is Everything which aims to make access to live music easier for deaf and disabled festival goers.

TICKETS NOW ON SALE from www.villagegreenfestival.com