Tilbury Football Club and Apex Platinum Investments are delighted to announce that their public consultation event on exciting proposals to deliver major upgrades to the club’s facilities will take place on Tuesday 30th July. The public exhibition will display the full emerging proposal for a £5 million investment in modern and purpose-built facilities that promises to take Tilbury FC to the next level. 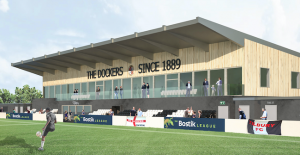 Formed in 1889, Tilbury FC is one of the oldest football clubs in the country and has called its current ground at Chadfields home for over 70 years. However, its current facilities are tired and in need of significant investment to secure a bright future for the club.

The current scheme seeks to deliver a new purpose-built community football stadium with 4,000 capacity, new clubhouse, gym, multi-purpose hall and car parking. The delivery of up to 112 new homes on brownfield land adjacent to the club’s ground will provide funding to enable the improvements to Tilbury FC.

The details full details of the public exhibition are:

The consultation event has been organised to invite local residents and fans to have their say on the emerging proposals for the football club before the proposals are finalised and submitted to Thurrock Council later this year. It will also kick off alongside the Dockers’ pre-season match against, Hashtag United, the high profile 2017 Wembley Cup Winners who will also be calling Tilbury home for next season.

Anyone who is unable to attend the consultation event can still view the vision for the future of the football club by visiting the dedicated project website at www.tilburyfcconsultation.co.uk.

“As a local Thurrock-based developer, working to secure the future of Tilbury Football Club is a project close to our heart.

The proposals for a modern community stadium, an all-weather football pitch and supporting facilities present a golden opportunity secure a bright future for the club and we hope as many people as possible engage with our consultation to take Tilbury forward.”

“We were formed by local dock workers all the way back in 1889 and take pride in the role we have always played in the community. That’s why we’re keen for our community to play a key role in shaping the vision for Tilbury Football Club’s future.