André Rieu waltzes back on to the big screen

NEXT year maestro André Rieu is marking his 70th birthday by composing the ultimate concert – and it will be shown on the big screen.

Showing at Vue Thurrock on January 4 and 5, these two unmissable shows will see cinema host Charlotte Hawkins giving fans a taste of the party in Maastricht as she talks to Rieu and uncovers his life story over 120 minutes, in André Rieu: 70 Years Young. 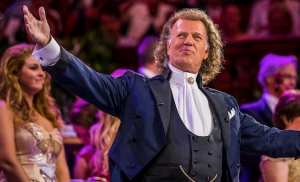 Viewers will be taken on a journey around the world as Rieu hand-picks the best bits from his glistening career. From Brazil and Mexico to Radio City Music Hall New York, the audience will see Rieu performing in his most remarkable concert locations, whilst also gaining an intimate insight into his life around music.

Find out about Rieu’s childhood growing up in a musical family, his formative days in a church choir and the long line of concerts that led to his record-breaking world tours.

André Rieu: 70 Years Young is set to be even more popular than his most recent Maastricht concert, André Rieu: Shall We Dance? that hit screens in Vue only recently.

Johnny Carr, Event Cinema Manager at Vue UK and Ireland, commented: “We’re always excited to be able to offer André Rieu’s concerts on screen at Vue, but this show in particular is extra special.

“We’re able to provide all the highlights we’ve previously loved to watch in one special screening, in the highest picture and sound quality. Fans will feel like they’re celebrating Rieu’s 70th alongside him.”

André Rieu: 70 Years Young will be screened at Vue Thurrock on January 4 and 5. Tickets can be booked at www.myvue.com.