THE leader of Thurrock Council has said he will write to the Government to demand extra powers for collecting fines issued to vehicles registered in another country.

Councillor Rob Gledhill’s announcement has come after new figures revealed that just 17 per cent of vehicles registered outside of the UK have paid parking penalties issued in Thurrock. 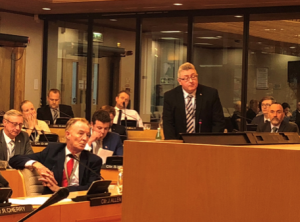 The data from a freedom of information request shows that of the 2,337 notices issued to foreign-registered vehicles, just 417 have paid – leaving 1,920 getting away without.

Thurrock Council explained they currently use contractors to trace and collect unpaid penalty charge notices issued to foreign registered vehicles. These contractors have access to licensing information from several European countries but not all.

One initiative that was aimed at targeting foreign HGV drivers saw the council clamping vehicles and refusing to release them until the drivers paid all previously issues notices. It generated £30,000 for the council.

Mr Gledhill said: “The law as it stands around how we are able to collect fines issued to vehicles registered in another country once they have left the UK is simply not strong enough.

“I will be writing to the Secretary of State to ask that local authorities are granted extra powers to seek these fines from abroad and also make it easier to collect them when they return to the UK.

“I have recently personally made contact with the contractors we used previously to initiate a further operation targeting those drivers and companies from abroad who think they can get away with breaking our laws. This will be a multi-agency approach to target those in dangerous vehicles.

“I am also aware that this is an issue for the owners of the Dartford Crossing and will be writing to them directly to see if there is an opportunity for us to work together in tackling this issue.”

Last month, Southend Council also announced that they would be renewing efforts to crackdown on drivers from other countries who try to duck out of parking fines.

Southend’s deputy leader Councillor Ron Woodley said it is time to “send a message” that says “if you come to Southend and break the rules of the town you will get nicked”.

The council said it will begin working with the firm Euro Parking Collection to collect unpaid fine, a company that already works with almost all London councils, as well as several other areas such as Cambridgeshire, Leicester and Portsmouth.