THURROCK MP Jackie Doyle-Price was at Parkside on Saturday to present a cheque for £4,300 to Gary Walden who was the first winner of the club’s Community Grand Draw, Gary has been a loyal supporter of the club over a number of years and a worthy recipient of the prize. 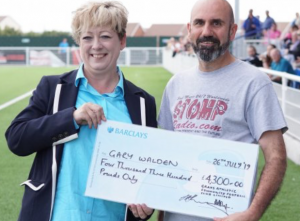 The club inaugurated the draw at the beginning of last season and for just £10 per month a prize of £100 is on offer each month with two special draws the first in April, and the Grand Draw in July. The scheme has proved a great success and very popular with supporters and friends of the club.

Application forms to join the draw can be found and downloaded on the club’s official website.