EXTINCTION Rebellion  is having an open meeting and discussion for residents at the Thameside Theatre meetings room on Wednesday 11th September, 7:00 to 8:00 pm.

They will be joined by XR Southend’s Jonathan Fuller, who will talk about the productive work he has done, talking to news outlets including ITV and Channel 4, regarding their coverage of the climate crisis, and other aspects of XR’s fast-evolving campaigning. 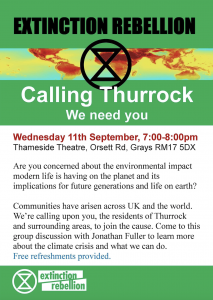 The organisers are local residents who have been increasingly alarmed by the news surrounding climate change and damage to biodiversity. In response, they are setting up a local Extinction Rebellion group, to help push for the three initial demands:

They would very much like to work with Thurrock Council, particularly with regard to the many new developments planned locally and will have some councillors in attendance.