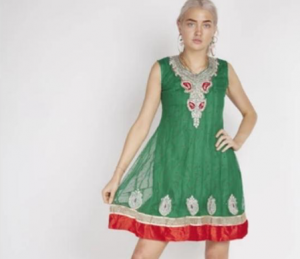 A Twitter user named Diya spotted it and shared screenshots of the ‘dresses’ in question.

She wrote, “Vintage boho dress????? girl u got on a kameez with no salwar.” Her Tweet became viral on social media in no time, collecting over 14,500 likes and nearly 7,000 retweets.

The images were from a vintage and retro clothing website based out in Purfleet.

According to Metro, the website, Thrifted.com, pulled down the garments after the backlash. A spokesperson told Metro, “Thrifted.com purchased a bulk mix of vintage/secondhand dresses from a supplier who had labelled them as “boho”. They were then listed on the website under this name.” It was later brought to the customer service team’s attention that not all of the secondhand dresses were, in fact, boho dresses.

“Some were, in fact, south Asian salwar kameezes. All of these items were then removed from our website. We apologise for any offence caused. We are updating our stock checking system as a result,” the spokesperson said.