POLICE Officers will be carrying out a traffic operation at junction 31 of the M25 this week following severe traffic congestion in the area.

“A high volume of traffic flows through junction 31 on a daily basis, with the roundabout a key route for many road users” said Essex Police Road Crime Manager, Matt Hine.

“The junction has a history of getting blocked, which effects many of the surrounding roads and can take several hours to resolve, causing massive disruption to the public and businesses in the area. 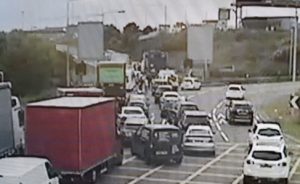 “A major reason for the congestion is that drivers fail to comply with yellow box legislation, entering the box without having a clear exit, causing the surrounding roads to become blocked.

“We are working in partnership with Thurrock Council, who have responsibility for the road, to help enforce the legislation and ensure traffic flows freely through the junction.

“We will be taking action against anyone who fails to adhere to these rules.”

A box junction is a traffic control measure designed to prevent gridlock at junctions. Under the rules of the Highway Code, drivers are not allowed to enter the yellow box unless their exit is clear and there is enough space on the other side of the junction for the car to clear the box completely without stopping.