Emily is racing ahead at USP College!

Racing ahead at USP College!

Emily Linscott is currently carving out a career in the fast lane!

EMILY, 16, from Basildon, who is currently studying Sports & Exercise Science at the Palmer’s Campus of USP College, is flying up the ranks on the racing circuit.

Emily only started karting at the end of January 2016, aged 13, achieving numerous podiums, lap records and a Championship title within the first year. 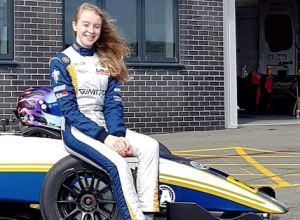 After being scouted and signed by Arden Motorsport to their Young Racing Driver Academy in 2017, Emily made her racing car debut at Rockingham Motor Speedway in August 2017 as part of the prestigious Simpson Race Products Ginetta Junior Championship, as well as competing at Silverstone and the season finale at Brands Hatch GP.

In 2018, Emily raced her first full season in race cars in the Ginetta Junior Championship achieving 10th place overall in the Rookie title. She tested in a Formula 4 car in August that year and made her International F4 debut in November at the Sepang F1 circuit in Malaysia, taking two 7th place finishes.
2019 has seen Emily race across the US in New Jersey, Kentucky, Wisconsin and California, achieving a top six position in all races, including two second places, three fastest laps, three pole positions as well as a new lap record NCM in Kentucky. She has also tested well in an F3 car at Donington posting some very fast times, which she hopes to follow up with again very soon.

With her teammate and sponsor Peter Bassill, Emily is currently taking part in the Britcar Endurance Championship, racing the Hedgehog Cyber Security backed Ginetta G55 GT4 car and has two rounds left; Oulton Park in Cheshire on October 26th and the final round at our local circuit, Brands Hatch, on November 9th and 10th. Emily said: “Juggling studying with training four nights a week in the gym plus simulator sessions is hard work, but I am committed to both and I am grateful to USP College for supporting me with my racing career.”
Emily has just been shortlisted for the Active Basildon “Young Sports Personality of the Year” award once again, a title that she is proud to have won last year.

December sees Emily take part in the Cooper Tires Scholarship Shoot Out, with the winner receiving a year of free racing at America’s best racing school, Lucas Oil School of Racing.
Emily said, “After college the aim is to make racing my full-time profession, but the big dream is to race F1, IndyCar or WEC.”

Teacher Ritchie Naylor said “We are extremely proud of Emily’s achievements and we will do all we can to support her. Her dedication and the hard work needed to keep up with her coursework is testament to her determination to succeed at college and in the world of racing.”

Find out how USP College can support you with your career aims at one of our open evenings. Book online now at uspcollege.ac.uk.