RECORDED sexual offences against children in Essex have risen by 64% in four years, data obtained by the NSPCC has revealed. 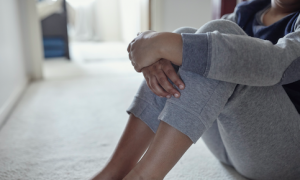 Analysis of the data also reveals that where age of victim was provided, 682 offences were recorded against children aged ten and under in Essex last year, with 38 of the offences against babies under the age of one.

Across the UK 76,204 offences were recorded, including rape, grooming and sexual assault against children, in 2018/19 – an average of one every seven minutes.

Children who suffered sexual abuse will often need extensive support but overstretched services are failing to keep pace with demand, and the NSPCC is calling for a radical reshaping of how this support is delivered across the country. 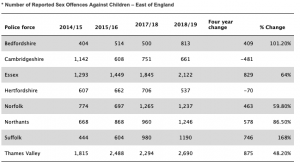 A total of 44 out of 45 police forces across the UK provided the NSPCC with the latest data on sexual offences against under 18s after a Freedom of Information request.

Peter Wanless, NSPCC CEO, said: “Record numbers of child sexual offences means we are facing a nationwide crisis in the help available for tens of thousands of children.

“These children are bravely disclosing what happened to them but in too many cases there is not enough timely, joined up and child-friendly support. Instead they are shunted from overstretched service to service.

“We need a radical rethink in the way we help these young people, otherwise they could struggle for the rest of their lives with long term, deep seated trauma.”

The charity is calling for the provision of specialised services around the country, with an emphasis on early joined up support from police, local NHS services, children’s services and advocacy for children who have experienced sexual abuse, offered in child-friendly spaces.

Such a partnership service is delivered in The Lighthouse in Camden, where all medical, advocacy, social care, police and therapeutic services are available to children and their families in one place.

This ‘one stop shop’ model connects timely therapy up with the needs of each child, with local NHS services from University College London Hospital and the Tavistock and Portman NHS Trusts delivering in partnership with the NSPCC’s Letting the Future In (LTFI) service.

LTFI provides therapeutic support for children who have been sexually abused. Young people aged 8 to 17-years-old who used the service showed a significant reduction in psychological and behavioural problems.