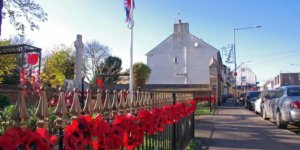 BLUNDERING Thurrock Council has been forced to apologise after its workers removed commemorative roses from a borough memorial garden – despite promising not to do so reports the Thurrock Independent.

After consultation with local residents and community organisations including Aveley and Kenningtons Community Forum, the council recently agreed to tidy up and make some improvements to Aveley’s memorial gard – in time for November’s remembrance services.

They agreed a plan of work which included cutting back ‘Burma Star’ rose bushes planted there in honour of the victims of the Second World War campaign.

However – turning a potential positive into a negative – workers waded in and simply dug them up and threw them away – causing consternation among local people and the forum and a wave of protest. Some residents immediately offered to fund replacement roses

Now the red-faced council has apologised for its error, and says it will attempt to put things right.

In a statement, the forum says: “We have been contacted today by Thurrock Council to offer their apology to Aveley and Kenningtons Community Forum for removing the Burma Star roses from the Aveley War Memorial Garden.

“Thurrock Council have accepted that at a recent meeting with Aveley and Kenningtons Community Forum it was agreed that the roses would be cut back rather than removed.

“We are aware of residents who were saddened by the roses being removed. Committee Members from Aveley and Kenningtons Community Forum were also saddened by their removal.