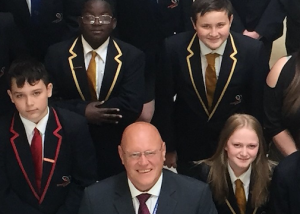 ORMISTON Park Academy has this week announced that its Principal, Mr Huw Derrick, is set to retire at the end of the academic year.

Mr Derrick first joined the school – which was then Aveley Secondary School – in 2004 as the Deputy Headteacher, before becoming Principal of the school, now Ormiston Park Academy, in 2014.

During this 15-year period, Mr Derrick has been integral in leading the school through a number of key milestones – making it the popular school of choice in the local area that it is today.

Amongst the many highlights of his time at Ormiston Park include leading the successful transition of the former Aveley School and then Belhus Chase Specialist Humanities College to become an academy. Mr Derrick championed the school’s decision to join national education charity Ormiston Academies Trust in 2009, a move which has continued to significantly benefit students, staff and the wider school community.

Alongside championing the school’s successful academy conversion, Mr Derrick played a critical role in the architectural design and build of the new £16.4 million state-of-the-art building in 2013, which continues to be universally recognised as an outstanding learning environment in the region.

During his headship, Mr Derrick also led the academy on its journey to achieve a Good Ofsted rating in all categories in 2017, having previously been rated Requires Improvement. Inspectors praised the “widely respected Principal” for creating a culture of high expectations and developing a distinctive ethos of ‘believe and achieve’, which had led to its rapid improvement.

Having first began teaching in September 1984, Mr Derrick has worked in six different schools throughout his career, all in the south of Essex, and has worked across every level of responsibility in the profession, from being a newly qualified teacher specialising in mathematics and P.E., right through to Principal.

Aside from over three decades spent proudly serving children and young people across schools Essex, Mr Derrick also passed out of the Britannia Royal Naval College in Dartmouth, serving as a Lieutenant in the Royal Navy and teaching artificer engineering apprentices. The leadership skills and training he received within the Navy College then went on to shape his leadership within schools.

The academy has now launched a recruitment process to appoint its new Principal, who will be starting the role in the new 2020/21 academic year. Mr Derrick, alongside the Board of Governors and OAT, will be working closely with the appointee to support their transition and to ensure that the academy continues to build on the strong foundations established.

“It is has been an honour to be the Principal of Ormiston Park Academy, and to serve so many children and young people across South Essex during my 36 years in education and teaching.

“I am extremely privileged to finish my career at Ormiston and I am confident that the school, with the support of our exceptional students, staff and wider community, is in a strong position to continue to go from strength to strength. I will be working hard throughout my remaining months to ensure a smooth transition.

“Following so many years of hard work dedicated to our fantastic young people, I am looking forward to enjoying what a further lifetime in retirement will bring, spent with my family and friends.

“I will continue to follow Ormiston Park Academy’s journey closely in the years to come, and look forward to seeing the success that the students and staff will go on to achieve together.”

“On behalf of the Trust, I would like to thank Huw for the tireless hard work, commitment and passion he has shown during his time at Ormiston Park Academy and throughout his career in education more widely.

“The success and positive direction of the academy, including achieving a Good Ofsted rating in 2017 and another strong set of examination results most recently this summer, is testament to Huw and his unwavering leadership.

“We are committed to now finding a first-class candidate that will match and build on the high expectations and standards that Huw has established during his many years at the school.

“We wish Huw all the best as he moves towards retirement, and look forward to watching the Academy continue to prosper and grow in its latest chapter”.