THURROCK Council will donate thousands of pounds to the British Red Cross as a tribute to the work they have done to support emergency responders who handled the 39 lorry deaths in Grays. 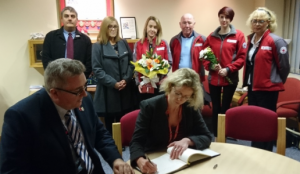 Emergency services discovered the bodies in the early hours of October 23 at the Waterglade Industrial Park on Eastern Avenue and pronounced 39 people dead at the scene, including one teenager.

The British Red Cross provided welfare and emotional support for the responders at both Eastern Avenue and at Tilbury Port during their on-site investigations.

On Wednesday, a representative of the organisation signed the council’s book of condolence at Thurrock’s civic offices and council leader Rob Gledhill announced he would be making a donation of £5,000 for their work.

Council leader Councillor Rob Gledhill said: “I would like to personally thank the British Red Cross for the support they have provided Essex Police and our partners at both crime scenes during this investigation.

“I am extremely proud of the way our blue light services, council officers and all other partners have responded in the wake of such a tragedy and its important their personal health and well-being is supported.

“The support the British Red Cross were able to provide in the moment has been crucial for our partners.

“I am delighted to confirm that Thurrock Council will be donating £5,000 to the British Red Cross as a thank you for their time and support during this difficult time.

“I would like to urge members of the Thurrock Community to consider becoming a Community Reserve Volunteer for the British Red Cross.”

Helen Sipthorp, area director of Crisis Response for the British Red Cross, said: “The tragedy in Grays last month was tough for everyone involved. We were glad to provide support to all those working at the scene in such sad circumstances.

“We’re really grateful to Thurrock Council for their generous donation, which will help us continue our crisis response work in the local community.”