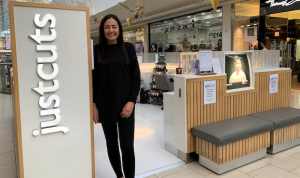 ON 4th November 2010, Holly Feltham signed her first hairdressing client. Exactly nine years later, she signed on the dotted line to take over operations of Just Cuts in Intu Lakeside. Fate is well and truly on her side as she now swaps her role as Senior Stylist to business owner of this popular salon.

The 25-year-old always had a flair for hair after immediately going straight into a hairdressing apprenticeship after school. Once she’d completed her training, Holly got a job working full time in a salon to improve her skills. After a brief spell going mobile and building up an impressive client base, she realised there was something missing.

“I began to miss the interaction of working in a salon with other people – getting to know the other stylists and our regular customers. I’m a naturally sociable person, so it felt strange not having a place to go to every day for work. Luckily, I saw that Just Cuts was opening a salon nearby and applied for a role – it was perfect timing for me.”

Just Cuts Intu Lakeside opened in January 2018. Holly enjoyed the team dynamic as the salon quickly grew in popularity. Less than 2 years’ later, Holly was presented with another great opportunity by Just Cuts – the salon was available to buy.

“I have to admit, there was a mixture of nerves and excitement as I considered becoming a business owner. I always thought it was a pipe dream to have my own salon but all the Just Cuts salons around the world are owned by franchisees who receive ongoing support to ensure business success.

“One of the reasons Just Cuts has done so well is our no-appointment system – clients can log in to our app and continue with their busy lives until it’s time for their spot in the chair. I’m looking forward to experiencing my first Christmas as a business owner, getting clients ready throughout the festive season. It’s crazy to look back on how far I’ve come since signing my first client and I think the future’s bright for my next decade in hairdressing.”