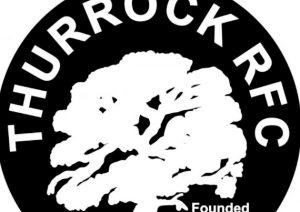 Thurrock enjoyed the best of the early exchanges, with some exemplary play from the outstanding Rob Murphy who seemed to make headway every time he touched the ball. With Essex player, Alex Jones firing out the passes, Thurrock seemed the more likely to score. A good run from Lewis Cross almost brought a breakthrough but the support was a little late arriving. Wayne Tredwell was “pulling the strings” from 10 and Thurrock seemed set fair as Ben Stanley made a searing break. A clever grubber allowed him to cleverly nudge a second kick past the defending fullback before diving on the ball for a fine individual score. Alex Jones hit an excellent conversion to put the visitors 7-0 up.

Not to be denied, Harlow exerted some pressure of their own and, in spite of a solid tackle by Ahmed Aminu, the Harlow No.8 Jamie “Jumbo” Clarke carried hard and drove over the Thurrock line for a score. Harlow failed with the conversion from near the posts.

Captain Earl Gorman was soon making an impact by crashing through the opposition defence. After one such effort, a flowing passing movement led to Stanley providing a sublime miss pass to Aminu. Gathering in his stride, there was no stopping the tenacious winger diving through a defender to register a terrific score. Jones failed hopelessly with the conversion from about a mile out!

Back came Harlow who were now threatening to control the tempo. After a long period of pressure, George Taylor put in a “George Ford” type kick and with Cross dragged into the line, the Harlow full-back Scott Whitby swooped in. Alas he missed the conversion and the highlight of the rest of the half was the charging rhinoceros run of Tom Wileman. Wileman was coming into his own with powerful running and tackling which inspired his team-mates. He is looking a fine prospect for the future!

Amazingly the second-half brought a stalemate as Thurrock were forced into raising siege after siege. Captain Gorman was magnificent as he made charge after charge out of his own half. Aminu added another savage tackle to thwart yet another attack and Lewis Cross made a last-ditch tackle reminiscent of his days as a flanker.

In spite of a plethora of late penalties and some dubious touch kicking from the visitors, Thurrock managed to hold on to record an impressive win in the Essex Cup and move onto the Quarter finals.

Man of the match was a tough decision following the mesmeric performance of Rob Murphy & Barnstorming running of Earl Gorman but it was the returning Ben Stanley who scooped the award following his individual try and fine assist for the other showing that Class is permanent.

On Sunday there was an outstanding performance from the Colts as they defeated Basildon by 24 points to 10. They are having a brilliant season and we are looking forward to a very bright future.