Thurrock Courts Players set a date for When We Are Married 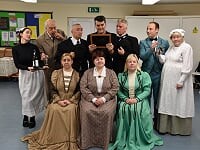 WHEN WE ARE MARRIED

THURROCK Courts Players start the new decade with a bang with their first production in what promises to be an exciting year ahead.

The Players have been hard at work over the recent months on the classic piece of comedy theatre When We Are Married. This clever comedy written by JB Priestley, who also wrote the spectacular An Inspector Calls, tells the story of three couples all married on the same day in the same chapel in the North of England.

As the group gather to celebrate their silver wedding anniversary and reminisce, it emerges that the ceremonies may not have been legally binding, leaving the couples unmarried and socially scandalized.

This play has been performed twice before by Courts in 1975 and 1989 and now in 2020 two long standing members of the group will have appeared in all 3 productions. Jayne Jones has played the roles of young lover Nancy, Alderman’s wife Maria and now Mrs Northrop the spurious cook. Martyn Williams reprises his 80s role of Harry Ormonroyd, the slightly worse for wear photographer, while in the 70s made up the other half of the young lovers as Gerald.

The show runs from 30th January to 1st February at the Thameside Theatre, Grays and tickets are available now.

This begins a fantastic year of productions from Thurrock Courts Players who will be presenting the sequel to their hugely successful portrayal of The Vicar Of Dibley in May and the hilarious A Bunch Of Amateurs, written by Ian Hislop and famously starring Burt Reynolds on screen, in September.

For further information and to book tickets please visit the website www.thurrockcourtsplayers.co.uk or call our Box Office 07475 634 474