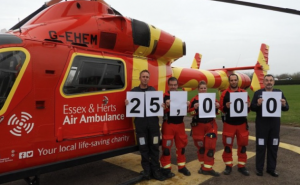 THE Essex and Herts Air Ambulance Trust have hit a special landmark following 21 years of service, after it was revealed that 2019 was their busiest year yet.

The team – which was founded in 1997 – were proud to announce that they have tasked a total of 25,000 missions, with the milestone reached attending to a crash in Hertfordshire on New Year’s Day.

This follows the news that EHAAT attended to 1,526 patients in 2019, making it the busiest year ever for the charity’s critical care teams.

Stuart Elms, EHAAT’s clinical director, said: “The last 12 months have been a hugely significant time for EHAAT and we are proud of two key developments over the last year.

“In March, we began carrying blood products on board our helicopters and rapid response vehicles (RRVs) thanks to our partnership with The Princess Alexandra Hospital in Harlow and the Essex Voluntary Blood Service.

“We have been able to provide potentially life-saving transfusions to patients suffering significant blood loss.

“Since October, our critical care team has been delivering a 24/7 pre-hospital care service to the people of Essex, Hertfordshire and surrounding areas using helicopters by day and RRVs by night.”

During 2019, EHAAT’s helicopters and rapid response vehicles were dispatched a total of 2,238 times. Medical incidents accounted for 39 per cent of total callouts, followed by road traffic collisions (21 per cent) and accidental injuries (16 per cent).

The remaining 24 per cent included a mix of cases, such as assaults and sports or leisure accidents. Blood transfusions were also provided to 35 patients last year.

Although EHAAT’s services are provided free of charge, the charity recieves limited direct funding from the government and none from the National Lottery.

Monthly costs exceed £750,000, which ensure the service is kept operational and cover all charitable costs.

Mr Elms added: “I’d like to take this opportunity to thank everyone who helps us. None of this would be possible without the amazing backing we receive from our supporters and volunteers across both counties and our partners in the NHS and emergency services.”

To donate to EHAAT or learn more about fundraising opportunities, visit ehaat.org.