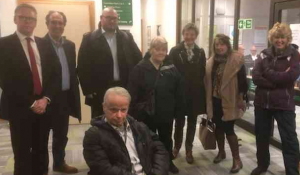 LOCAL councillors have expressed their disappointment after an application for housing in their ward has been delayed.

The plan is to build eight homes on land adjacent to Curling Lane, Helleborine and Meesons Lane in Grays.

It was due to be discussed on Thursday night at the planning committee but was deferred.

In a joint statement from cllrs Martin Kerin, Jane Pothecary and Tony Fish, they said: “We are bitterly disappointed that the Council has, at the last minute, deferred this application. Our residents in Badgers Dene and Meesons Lane have had this hanging over them for a year now; this delay is unacceptable.

The proposed housing in this scheme would be completely out of keeping with the area and, when taken with the development of the old gas works site on London Road, significantly change the character of the area.

“When you add in the ecological and environmental damage caused to an area designed to accommodate wildlife, it is time for the Council to face up to the fact that the scheme is flawed, and overwhelmingly rejected by local residents.”