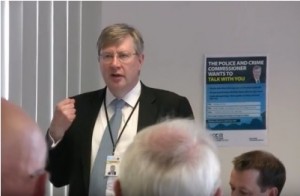 Roger Hirst, Police, Fire and Crime Commissioner for Essex and national lead for police finance welcomed the announcement of the government’s funding settlement of policing.

Speaking after the announcement Mr Hirst said “Today’s announcement marks one of the largest ever investments in policing nationally by central government and will kick start the biggest recruitment of officers in recent times. The extra funding will allow forces such as Essex to recruit and sustain hundreds of extra officers and provide local forces and Police, Fire and Crime Commissioners with the resources required to invest in those officers, their training and help them to get the technology and support they need to be as effective as possible in their local communities.

“As the national lead for finance for Police and Crime Commissioners, I have been working closely with the government for a number of years to secure a sustainable funding settlement. Today’s announcement is recognition that they have been listening to the challenges faced by policing, but also have seen the difference Forces can make in tackling some of the significant challenges in our communities especially around violence, gangs and reducing crime.

“As we continue to work with the government on the future funding of policing and in particular the long term funding set out through the Comprehensive Spending Review, I look forward to continuing the strong, evidence based conversations we have had up to now.

“In Essex we have been strongly supported by our local communities who have shown over the last two years a willingness to invest more in policing. Due to this strong support we have been able to recruit, train and deploy 368 extra officers over the last two years, largely in local, community-based roles. On top of this locally funded growth, the increase in funding for 135 extra officers, which has been confirmed by government today, means that by the end of March 2021 there will be 500 more officers protecting and serving our County than there were in 2016. We will also ensure that they are properly supported by the essential police staff as well as the equipment, facilities and all the resources they need to do their jobs.

“Today’s announcement is a significant step towards achieving the Government’s aim of recruiting 20,000 extra officers nationally. Over the next three years, this will make Essex Police the largest and strongest it has ever been.

“In Essex we saw the need for extra officers early and acted quickly so our recruitment programme is well underway and delivering large numbers of high quality new recruits. This early start means we are well ahead of other areas in the country and will be able to access the extra funding announced today but ring fenced until forces meet their officer recruitment targets. This significant increased investment also means I can limit this year’s precept increase to only deal with inflationary pressures. This is great news for the people of Essex!”