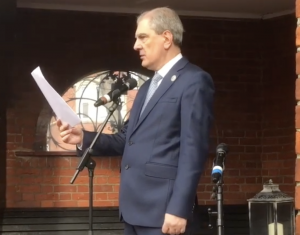 THURROCK antisemitism campaigner Stephen Silverman was invited by Thurrock Council to speak at today’s memorial service to commemorate the Holocaust and used the platform to slam the British Labour Party and its leader Jeremy Corbyn.

Mr Silverman was speaking as a director of Campaign Against Antisemitism, a registered charity that works to counter rising antisemitism through education and zero-tolerance enforcement of the law.

Full report and film can be found below.