Thurrock secured a fine victory over high-flying Belsize Park at Oakfield on Saturday.

OVER the past few weeks Thurrock have put in some outstanding performances only to fade in the second half and fail to complete the victory.

This had been an emotional week for the club members, having lost its long standing Manager, Kevin Hymas. However the team, sporting the horrendous socks Kevin had invested in, were in no mood for weak finishes. 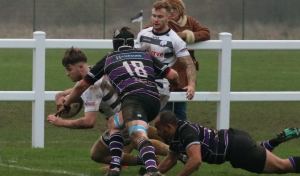 With Alex Jones at 10, Thurrock were up against newly promoted Belsize Park who have had such a good season at this level. Based in Regent’s Park the Belsize Club is one of the oldest in the World offering rugby to a transient London population.

Ts started the game with a bang when from a set-piece in the opening minute, the returning Henry Bird opened up Belsize like a surgeon seeking a serious investigation at the heart of the Belsize defence! After crashing through a couple of would be tacklers Bird flew through the gap before delivering the perfect pass to right winger, Kye Holloway. Kye, whose brother Kodie had come onto the bench, lined up opposite number Oliver Lee before stepping around him to accelerate hard into the corner for a well-taken try. Dylan Fearon couldn’t convert from wide out.

As so often this season, Thurrock let the opposition back into the game. Centres Cameron Roberts and Euan Miller started making headway and managed to spreadeagle the home defence before scoring close to the posts. Fly-half, Jake Cutter put the Regent’s Park outfit into a two point lead.

Thurrock seemed to regain their mojo with some crunching engagements and excellent charges from Jack Cowman, Rob Murphy and Tani Loka. Dan Stone was getting plenty of the ball on the left wing and made some dangerous sorties into the opposition half.

Full back, Niall Clifford was entering the line and making crucial inroads into Belsize territory. He is beginning to be a potent weapon in Thurrock’s armoury and from one foray, he scored an excellent try. Fearon hit the post with the conversion.

Ts managed their 3rd try of the afternoon just before the break following a series of drives where Thurrock were left frustrated and unable to produce the vital score, it was Clifford again who ploughed over from close range to give Thurrock the half time lead of 15-7.

The 2nd half started badly for Ts when Joss Nunn went to “the bin” for a technical offence, this allowed the away side to come back to prominence. After a series of driving mauls, with No.8 Thomas Kynge to the fore Belsize started to gain territory.

Nevertheless, Thurrock were not about to succumb and rampant skipper, Charlie Russo led his charges admirably as they attempted to thwart the visitors whilst a man down.

Suddenly, Belsize were stung into action and, after some hard driving play they camped on Thurrock’s line before getting back into the game with a deserved try.

Over the course of the season, Thurrock have seemed a little jaded in the second-half. Coach, Martin Jones, had called for a “full eighty minute ” performance. The players were determined to end this longest of weeks, on a positive note, however just when it seemed as if Thurrock would pull away, Henry Bird was given a yellow card and, for a while, Thurrock were reduced to 13 players and struggling! Belsize Park took full advantage and set up a series of forward drives and, inevitably, prop Conor McGrath smashed his way over. Cutter missed the conversion.

Just as it seemed as if Thurrock were in trouble, the irrepressible Joss Nunn imposed himself on the game. Picking up a pass close to half way he powered through a couple of tacklers before setting out on a sprint for the corner. It would have taken Dina Asher-Smith to catch the “Thurrock Express” in full flight and he completed his eleventh try of the season at “the eleventh hour” to give Ts the bonus point

With Thurrock now in the ascendancy ,the home side looked home, if not exactly dry! This Belsize team, however have taken some big scalps this season and came back with a clinical try to take a shock lead.

With the referee looking at his watch, Thurrock launched one desperate attack after another and with Loka bursting through gained some much needed territory. Then some untidy line-out work gave Belsize one last chance. As they tried to run out of defence some powerful play by Charlie Currie and Sam Reilly enabled a turn-over in midfield. Belsize committed a foul at the breakdown and Dylan Fearon kicked the winning penalty from close range.

Belsize Park now threw everything at the Oakfield outfit in a last ditch attempt to retrieve the situation. On this occasion, Thurrock were not to be denied and after a scrum, utility player, Rob Murphy kicked the ball off the field for a home win.

No more than Thurrock deserved from a highly entertaining and exciting game. Thurrock had said goodbye to one of its stalwarts in the best possible way.

This week, Thurrock look to avenge the last minute defeat from earlier in the season as they make their first ever visit to Horsham. Kick off is 14.30pm.