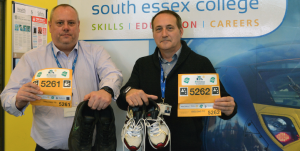 TWO members of staff at South Essex College are taking part in the Brentwood Half Marathon to raise funds for charity.

Darren Phillips and Stephen Davenport, who are tutors and assessors in the Logistics Department, will take on the 13.1 mile course in aid of Help for Heroes on 15 March.

The feat is even more of a challenge for Darren – he snapped his ankle four years ago in an accident which left him unable to walk for a year. He now has nine pins in his foot and has spent the last three years getting back on his feet.

The pair chose to raise funds for Help for Heroes to ‘give something back to our brave armed forces’. The cause is also close to Stephen who spent 14 years in the army, which included active service in the Falklands as well as being stationed in Northern Ireland during the Troubles.

Darren said he was looking forward to the challenge.

He said: “I wanted to give something back to those who give so much to us, plus this will be a real personal challenge for me. I’m not going to break any world records and even if I walk the whole thing I will be over the moon to complete it.”

Stephen added: “We have been going to the gym regularly to prepare ourselves but we know it’s going to be a massive test of endurance on the day. We have lots of support behind us which will help us reach the finish line!”

You can sponsor the duo via their JustGiving page at www.justgiving.com/fundraising/darren-phillips-tebbitt