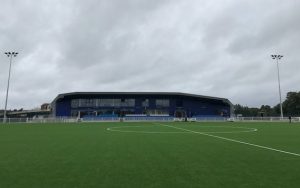 COMING off the back of Saturday’s momentous energy and nerve-sapping FA Trophy quarter-final at Notts County it was perhaps not surprising that Aveley were unable to peak again in Monday night’s BetVictor clash against neighbours Brentwood – but you couldn’t fault the lack of effort reports Thurrock Nub News.

The Millers dominated most of the game and were knocking on the door of a goal throughout the game but lacked the final touch to gain all the points to supplement their promotion push.

It was actually Brentwood who created the first chance, Harry Gibbs hooking away a dangerous second minute free kick, but Aveley were soon on the offensive and Jon Nzengo fired over. Alex Akrofi then had the ball in the Brentwood net with a deft chip after being put through by George Sykes but he was ruled offside.

Jason Raad’s shot was then palmed away by Town keeper Tim Brown, who followed up with a save from Akrofi. Akrofi then again had the ball over the line but was denied a second time for an infringement.

That was how it continued to half time, with Brown pulled off several more saves but Aveley were unable to break the deadlock.

As in the first, Brentwood started the second half well and David Hughes did well to save from Andy Freeman but ‘normal service’ soon resumed with Akrofi proving a real handful, coming close to winning a penalty but mysteriously the referee awarded a free kick outside the box when most observers in the impressive crowd of 242 thought the offence was inside. Raad’s free kick went over the bar.

The closing stages of the match became fractious, with a number of other bookings and a couple more missed opportunities for the hosts but in the end they had to settle for a point.