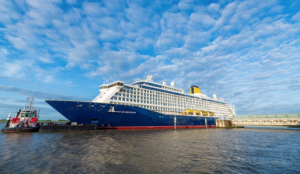 FOLLOWING the government’s calls for hotels to be used as overflow hospitals for coronavirus patients, a travel company has offered up two cruise ships docked in Tilbury.

The Local Democracy Reporting Service understands that the travel company that operates two cruise ships currently docked in the River Thames have had conversations with the government about using the ships as floating hospitals.

Saga Group’s Spirit of Discovery and Saga Sapphire docked in Tilbury earlier this week after being turned away from their usual port in Southampton due to limited space.

The ships are now set to remain in Essex for the foreseeable future after cruises worldwide were cancelled.

But rather than leave them sitting dormant the owners have told Westminster they are willing to offer up the luxury ships as overflow hospitals should the NHS become overwhelmed. Combined the two vessels have more than 2,000 cabins.

Despite conversations taking place with the government, no decision has been taken on whether to actually use the ships.

Labour Councillor Councillor Steve Liddiard, who represents the Tilbury St Chads ward, said: “I understand this has been happening in a number of countries and if things get that serious – and we hope it won’t – then it sounds like a wonderful opportunity.

“How it would work practically of course, I don’t know.

“Specific facilities would be needed such as piped in oxygen and I don’t know how practical that is on a cruise ship but it is definitely worth a look.

“Hopefully the costs of providing the ships could be met by the NHS but lets hope that it doesn’t get to that. We do still have spare beds.”

Mr Liddiard suggested the council should also be considering whether to use vacant spaces in the civic offices in Grays as an overflow, if needed.

In Italy, Europe’s worst-affected country, global cruise operator MSC Cruises has offered to help make up for the lack of beds inside hospitals using one of their ships, and in the US President Trump announced yesterday that the Navy would deploy two hospital ships to the east and west coast.