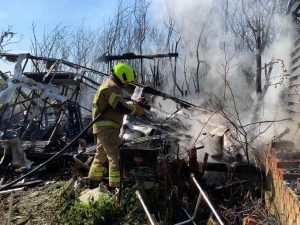 ESSEX County Fire and Rescue Service has issued a safety plea to anyone with outdoor space after an increase of almost 100% in garden fires during March.

Causes of the fires mainly involve bonfires burning out of control, as well as hot ashes and cigarettes not being extinguished properly.

Andrea MacAlister, Head of Community Safety, said: “With people spending more time at home and in their garden, and with recycling centres closed, it’s no surprise to see an increase in people having garden fires.

“But not only can a garden fire be unpredictable and destroy your outdoor space, it can quickly spread to your house and even neighbouring properties.

“We strongly advise people to avoid them if they can – we know some districts have banned bonfires, and we’d ask people to check with their local council to see if that’s the case in their area.

“Having a fire in your garden is rarely necessary or a good idea, it’s not worth taking the risk of it unintentionally spreading.

“If you really must to have one, and your district is still allowing it, never use accelerants like oil or petrol to light it and be sure to keep the fire small and away from your house, shed and fence.”

As well as an increase in garden fires, ECFRS has already reported an increase in accidental house fires and a decrease in road traffic collisions throughout March.