Mayor of Thurrock ‘honoured’ to continue for another year 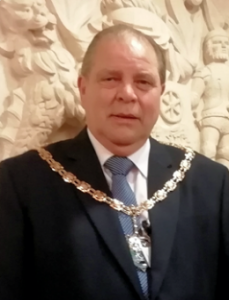 THURROCK’S Mayor has called it an honour to be asked to serve another year after the council announced the cancellation of their annual meeting.

Under normal circumstances the May annual meeting would have seen Conservative Councillor Terry Piccolo step down from his post as Mayor of the borough to be replaced by Labour Councillor Sue Shinnick, who is currently the Mayor’s deputy.

But with the Covid-19 pandemic forcing almost all council meetings to be suspended Mr Piccolo is set to stay on for another 12 months.

He called it an honour which he had not expected.

“I had not expected to be Mayor for another year but we are living in unprecedented times where a great many things cannot carry on as normal,” he said.

“I will therefore be honoured to continue in my role for another year and when the current situation has come to an end I will look forward to continuing to visit the many community groups, schools and businesses that make Thurrock the wonderful place that it is.

“I will also look forward to thanking all of them for the tremendous role they have played as the borough and country has dealt with this pandemic.

“I would like to take this opportunity to thank all council staff, the emergency services, supermarket staff and the volunteers who, along with the NHS, are doing a sterling job during these difficult times.”

Meanwhile, his successor, Ms Shinnick, confirmed she still has plans to take over the role in 2021.

She said: “I had been looking forward to becoming Mayor of Thurrock and celebrating the borough and all the fantastic people that live here and I still look forward to taking up that important role in 2021.

“Nothing can carry on as normal at the moment and I fully understand why these difficult decisions have to be taken. It will be my honour to continue as Deputy Mayor, serving the people of Thurrock during this difficult time.

“I would also like to thank and pay tribute to all frontline workers, volunteers and NHS staff for all that they are doing for us as the country deals with this crisis.”