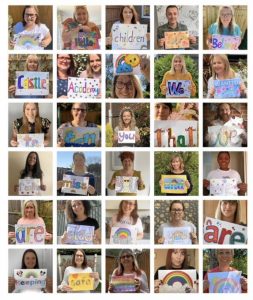 GOVERNMENT scientific advisers are examining the impact of letting children in their final year of primary school return to classrooms from 1 June, the Guardian has learned.

Boris Johnson is due to announce next Sunday that year six children, aged 10 and 11, will be the first cohort allowed back into schools since he announced their closure on 18 March, to be closely followed by other primary school years, and years 10 and 12 in secondary schools.

The Scientific Advisory Group for Emergencies (Sage) is said to be focusing on allowing back older primary school children initially, with the year group deemed a priority because of their need to transition to secondary school in September.

Downing Street confirmed that 1 June after the half-term holiday was its target – subject to the latest data on the spread of Covid-19 – and that the prime minister would make a significant announcement on Sunday offering a roadmap out of the lockdown. Sage is expected to meet on Tuesday.

A Whitehall source said: “The focus is getting primary school pupils back first but only if the R [a measure of how the virus is spreading] is at a safe level. After primary schools have returned we will then look at years 10 and 12.”

Both Johnson and Mark Drakeford, the Welsh first minister, made public comments on the need for schools to quickly reopen in some form.

“One of the things we want to do as fast as we can is get certainly primary schools back. It’s not going to be easy but that’s where we want to go. It’s about working out a way to do it,” the prime minister told the Sun on Sunday.

But Sir David King, a former chief scientific adviser who has set up an alternative experts’ group to rival Sage, warned school reopening would have to be “watched very carefully”. King said he thought June was too early but wanted to discuss the issue with his expert panel on Monday.

The government has been in talks with teaching unions in England over how and when to restart classroom learning. Schools have been using distance learning at home for pupils, with the children of key workers and those classified as vulnerable or with special needs still able to attend in person – though only about 2-5% have taken up their places.

Kevin Courtney, the joint general secretary of the National Education Union (NEU), which represents most primary school teachers, called on the government to detail how it would protect children, teachers and families.

He said: “While we all want to see a return to some sort of normality, the NEU believes it’s really premature to talk about a June return date. Instead, the government should be providing evidence about how this can be safe, how many more fatalities would we expect to see amongst school staff and parents and how these can be prevented or minimised.”

Paul Whiteman, the general secretary of the National Association of Head Teachers, said parents and the public wanted a decision made on robust scientific evidence, particularly on infection and transmission rates for different age groups. Last week a study from Germany found children were as likely to spread coronavirus as adults.

“There will be huge practical difficulties to solve, for example the much reduced workforce available due to illness and shielding, and the difficulty of achieving social distancing in schools, especially amongst the very young and on the school gate,” Whiteman said.