Essex firefighters help to welcome babies into the world 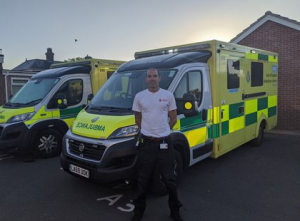 TWO Essex County Fire and Rescue Service firefighters who have been working as ambulance drivers with the East of England Ambulance Service helped welcome two baby boys into the world.

Adriaan Phillipsen has been an on-call firefighter at Frinton Fire Station for 14 years and to help during the Covid-19 pandemic, he’s been working as an ambulance driver.

In the last three weeks, Adrian – who is a kitesurfing instructor outside of the Fire Service – has worked alongside paramedics to attend emergency calls, working more than 150 hours.

A recent call saw him and his paramedic colleague welcome a baby boy, called Freddie, into the world in the back of the ambulance.

Freddie’s mum went into labour quicker than expected while en route to the hospital and the crew had to pull over to help deliver the baby safely.

Adriaan worked to get all of the equipment ready and to keep the woman calm and breathing, while his colleague helped to deliver Baby Freddie safely.

Mum and baby were both taken to hospital afterwards to be checked over.

Adriaan said: “Being able to bring a little bit of joy in to the world in this time of uncertainty and sadness is a great experience.

“The role of ambulance driver has been really eye-opening and I’m really enjoying it. I’ve been crewed with a different paramedic each time and it’s interesting to see the different ways that people work. I’ve learned a lot so far.”

Scott Taylor has been an on-call firefighter at Weeley Fire Station for 22 years and has also been working as an ambulance driver during the Covid-19 pandemic. 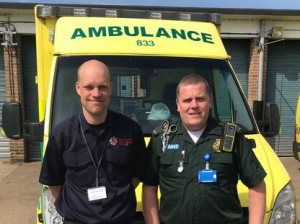 In the last three weeks, Scott – who works as a joiner outside of the Fire Service – has worked alongside paramedics to attend emergency calls, working more than 150 hours.

During a night shift, Scott and his colleague were called to a woman who was in labour and needed help to get out of her property and to the hospital.

Scott, his paramedic colleague and another paramedic in a car arrived and started to help the woman out of the house when her waters broke while going down the stairs.

Scott quickly got the stretcher to help the woman into the ambulance and before he had lifted the handbrake to drive away, the baby started to make his quick arrival into the world.

Scott said: “He was born within minutes. All credit has to go to the paramedics, they did a marvellous job. As things are in the world at the moment, it was quite a nice outcome to the end of a nightshift.”

Both mum and baby were ok and were taken to hospital to be checked over.

“I’ve found the whole ambulance driving experience really interesting,” said Scott. “Everyone I’ve worked with has been so nice. On the firefighter side of things, if we go to an incident where there is a casualty, as soon as those doors shut, you don’t know what’s involved. So being on the other side and being on the journey when an ambulance leaves the scene is really interesting. It’s given me whole new insight to everything.”

Paul Marshall, Head of Operations for Suffolk and North Essex at EEAST, said: “I feel hugely inspired right now, this sense of togetherness is a demonstration of the emergency services at their best, coming together in the public’s time of need to meet this national emergency head on.”