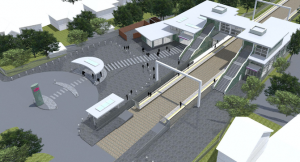 THURROCK Council is under pressure from opposition Labour councillors to hold a public review of the long-delayed improvements to Stanford-le-Hope railway station.

Work got underway on the redevelopment more than a year ago but it stalled soon after when the council realised its original designs were too expensive.

It led to a complete rethink of the plans, including opting to replace rather than repair the London Road Bridge which goes over Mucking Creek and connects to the station.

To make this change possible, the authority had to undertake months of negotiations with the Port of London Authority to purchase a strip of land on the eastern side of Mucking Creek.

It managed to strike a deal last week, allowing work on the station to resume. It is not known when the work will be completed but the scheme is already seven months past initial estimates.

Labour councillor Martin Kerin, chair of the Planning, Transport, Regeneration Overview and Scrutiny Committee, said: “I have ordered a complete review of the whole project.

“This is focused on two stages, first a complete review of the original project, including details of the overspend and time delays.

“Second, a deep look at the ‘new’ project which is at the ‘preliminary design phase’.”

He said he has asked for the review to take place at a public council meeting on July 6.

Meanwhile, Conservative councillor Mark Coxshall, who has overseen the borough’s regeneration projects, said the purchase of the land offers an “exciting opportunity” to improve the quality of the scheme and to make the station more accessible.

He added: “Our ambitious regeneration proposals will set the tone for future high-quality development across the borough, invigorate Stanford’s town centre and encourage more people to use local businesses.”

The station improvements are one of two major regeneration projects to have hit severe delays as a result of costs and design problems.

Earlier this week the council also revealed plans to widen the A13 have also been delayed by a year and gone £41million over-budget.

Cllr Kerin has called for an inquiry into these problems as well and branded it the “A13 fiasco”.