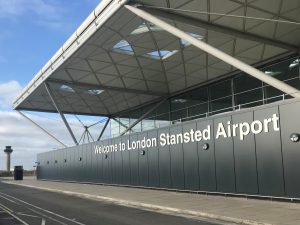 PASSENGER numbers at Stansted collapsed by more than 99 per cent in the first full month of the lockdown, new numbers have revealed.

Just 13,708 passengers flew into Stansted last month, a 99.4 per cent fall from its busiest period on record in April 2019, when nearly 2.4 million passengers used it.

A total of 37,495 passengers used Stansted-owner Manchester Airport Group’s three airports in April, down 99.3 per cent year on year.

The travel sector has been among the hardest hit by coronavirus, with travel largely put hold since March.

And airlines and airports are warning of significant harm if they are not soon allowed to fly to “low risk countries.

Ryanair, which is Stansted’s biggest client, says it hopes to operate around 40 per cent of its normal schedule from July 1 – including flying to holiday airports in Spain, Portugal, Italy, Greece and Cyprus.

But still only essential travel out of the UK is permitted.

Airport operators have also attacked the Government’s plans to force the majority of passengers arriving in the UK by plane, ferry or train to self-isolate for two weeks.

A statement from Charlie Cornish, group CEO of Manchester Airport Group, said: “For as long as it lasts, a blanket quarantine policy will be a brick wall to the recovery of the UK aviation and tourism industries, with huge consequences for UK jobs and GDP.

“By enabling people to travel between the UK and low risk countries, the aviation industry is able to help lead the UK economy out of this crisis, just as it has in previous recessions. But in order for this to happen, the Government must work quickly to create a smart and targeted approach that recognises that many countries are already low risk.

“European countries are starting to open up, and some that are popular with British holidaymakers want to agree two-way arrangements with the UK to enable travel.

“Government has to take a risk-based approach to quarantine arrangements to enable air travel to restart and to allow British people to enjoy well-earned holidays in safe countries. At the same time this would help kick start UK tourism and hospitality industries, saving businesses and jobs.

“A blanket quarantine will seriously jeopardise the long term future of the sector and put tens of thousands of jobs, and billions of pounds of economic value, at risk.”