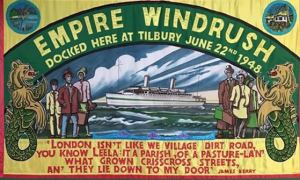 TODAY, Monday 22 June, is the 72nd anniversary of the arrival of the Empire Windrush to Tilbury Docks and is the third National Windrush Day – a day dedicated to encouraging communities across the country to celebrate the contribution of the Windrush Generation and their descendants.

Cllr Deb Huelin, Cabinet Member for Communities, said: “For Thurrock, the heritage of the Windrush story is one of many examples of our motto in action – ‘By Thames to all the Peoples of the World’- our commitment as a council to celebrate and recognise all within our diverse communities.”

The Empire Windrush was the first of many such arrivals over future years, bringing migrants who responded to the invitation to travel to Britain for work. It is not known how many travelled in this period, but the iconic image of the Empire Windrush at Tilbury Docks is synonymous with that historic event that started right here in Thurrock in 1948. The term ‘The Windrush Generation’ has come to describe those who settled in the UK from the Caribbean having saved and borrowed to raise the funds to make the journey and start new lives.

Cllr Deb Huelin added: “The Windrush Generation is recognised for its determination to become established, find work and for the wide ranging contribution to British culture today. The excitement for new beginnings which drove many to make the life changing decision to travel to the UK was often marred by hostility on arrival. Racism and discrimination were common, and migrants often struggled to feel settled. We know this remains to be an issue today. We all have a responsibility to address this and Thurrock Council is determined to do so.

“Unfortunately community events to commemorate, celebrate and educate about Windrush Day are restricted this year, but I encourage you all to take the time to listen to one song, to watch one play or to enjoy some Caribbean food to remind you of our role in our local history, marked today nationally.”