Explosion and fire at grain solo in port of Tilbury

Crews will continue to remain at the scene during what will be a protracted incident while the fire burns in a controlled enviroment. Firefighters continue to work with site staff and partners to monitor hotspots within the silos. 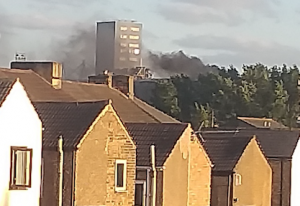 Crews were called to an incident at Tilbury Docks today at 9.55am.

On arrival, firefighters found a grain silo was on fire. Crews got the fire under control but the grain is still smouldering.

Two crews, from Grays and Orsett, remain at the scene and are working with site managers to remove the unaffected grain from the silo so it does not ignite.

Crews are working with site managers to get the site back up and running and are liaising with Port of Tilbury Police to allow businesses back to their premises at the appropriate time.

Watch Manager Dave Bond said: “Thanks to the hard work of the crews, we extinguished the main fire quickly. We’ve now reduced the number of crews needed to two, and these firefighters will continue to dampen down a smouldering fire in the top of the grain silo.

“It was a great joint response from the Port, Ambulance Service, Port of Tilbury Police and Fire Service to control the incident and stop it from escalating.”

There are four fire crews at the scene.

Fire service state they will issue a statement in due course.

YT has had a number of reports of a large bang coming from the port of Tilbury area.

Residents from the Grays and Tilbury area heard the noise this morning.

Residents as far away as Wharf Road and Seabrooke Rise said their houses shook.

YT has contacted the emergency services.

More follows in this developing story.