Thurrock MP Andrew Mackinlay has expressed his delight that the Gurkhas have at last won their battle for U K settlement rights.

Mr Mackinlay said: – “This as a great day for fairness. Last month I told the Government the Gurkhas would inevitably win their campaign for the right to abode in the United Kingdom and I’ve been proved right!

“I’m particularly delighted for the 400 or so Gurkha families who have settled in Thurrock. They’ve already made such a positive impact here and can now look to the future with a renewed optimism” 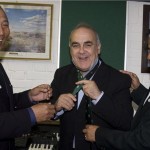