The latest winner of the Jack Kendall writing competition at Brentwood Writers’ Circle is long time member, Peter Pascoe, who  received his award from BWC Chairman, Ena Love. The event was extra special in that it was our Annual Writers’ Day and our guest speaker this year was Marion Hough, Chairman of Swanwick Summer School. 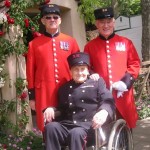 During the past week, I received several calls from veteran soldiers serving with the Essex Regiment during World War II. Not many local soldiers who took part in D-Day remain! Some appreciated last week’s feature on the D-Day commemoration in France last weekend. Had been invited to cover this memorable event, but conflicting diary dates made this impossible. However, gave readers of the Weekly News a few memories of Brentwood around the time of this top secret ‘Overlord’ operation. Few pics used are linked to Jimmy Reddell – first Freeman of our Borough. He died in 2007 aged 97 but lived for the last few years of his life at the Royal Chelsea Hospital where I used to visit monthly. Here he is at the Chelsea Flower Show in 2006 pictured with a few of his pals from the Hospital. Jimmy wrote his memoirs of D-Day and his life as a soldier and we do miss this lovely man.