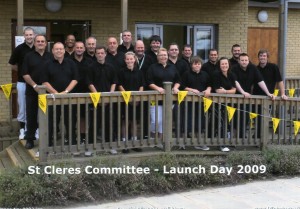 Sunday 6th September 2009 was a momentus day in the history of St.Clere’s Football Club as the club was officially opened. Councillor Gary Hague was present to cut the ribbon with Club Chairman Bill Mumford and Club Secretary Tracey Price to the delight of the Committee Members who have worked tirelessly to ensure that this day came to fruition.

St.Clere’s Football Club was formed in 2009 and already hosts 8 teams ranging from U10’s to Mens Sunday Team. Overall 20 teams took part in the Launch Day Tournament which marked the opening of the club and some splendid football was played in excellent weather conditions. All games were played in the spirit and passion that this beautiful game deserves and long may it continue.

As well as the sporting element there was also non-football related activites to keep everyone happy. Special mention of thanks must go to the Freewheelers and Diabetics Associations for supplying the tombola stalls and to the TAVR/Coalhouse Fort Army for their fine display of military vehicles. Thanks also to the St.John Ambulance,Caterers, Bouncy Castles and the Star Wars enthusiasts who mingled with the crowd to have photographs taken with their costumes.

The raffle , which featured the top prize of 2 England vs Croatia tickets, was drawn by Claire Friend of the Stanford-Le-Hope First Response Ambulance Service and hopefully the winner enjoyed their trip to Wembley. All prizes were claimed on the day but details of the winning numbers and further details about the club can be found on the Club website www.stcleresfc.webs.com

The Club is also seeking to strengthen and add to our already exisiting squads so any manager , players or parents wishing to join our ever increasing family please contact the Club Secretary Tracey Price via the Website contact details.