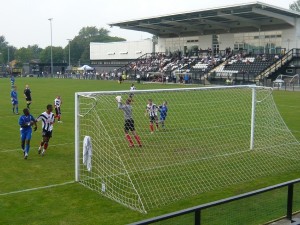 Millers pre-match plans were in disarray, as players travelling through Central London arrived as late as 2-45. Despite the late arrival of both players, and the team kit, Aveley went on to record their first ever league victory over the Terrors, in a very professional performance. Missing Michael Alaile through injury, Darren Blewitt came into the back four, and Piers Wixon continued in the absence of the suspended Martin Tuohy.

Craig Patterson’s long range goal of the season contender provided the Terrors, if undeserved, an early lead. But the fast breaking visitors were soon back on the offensive and it was no great surprise when Terrors skipper Joe Vines encapsulated a personal nightmare of a half by slicing a whipped in cross from Mitch Hahn, the ball ending up in his own net for the equaliser. Four minutes later a deep cross from the left was pushed back into the danger area by Hahn to Wixon on the edge of the area. There was an air of inevitability about the outcome as his low shot was missed by a succession of flailing limbs before settling in the back of the home net.

Terrors finally started to wake up in the last few minutes of the half with Jason Henry setting up Simon Parker for a shot that drifted wide of a post. A flurry of corners followed, the last of which provided a header for Mitch Nelson that superbly pushed out by the alert Jamie Lunan.

A far more determined home side emerged after the break with Paul Vines getting in an early shot, followed in the second minute by a Matt York long range free kick that let Lunan know that his afternoon was about to get much busier as he pushed it over for a corner. Another couple of Tooting corners followed in quick succession, with a refocused Joe Vines coming close to scoring at the right end with a close range header.

Despite Tooting having more of the ball and showing less of an inclination to give it away, the threat from the Millers was still very real and within the first five minutes Dave King was forced into a smart block following a rapid raid down the right wing. Parker again showed what an asset he is to the team with some great individual work and Jamie Byatt started to find his form, but before any further assault could be mounted on Lunan’s net another right wing move gave Hahn the chance to test out King.

With Tooting pressing hard for an equaliser, the game became stretched and Millers looked dangerous on the break, whilst Blewitt dominated the aerial exchanges as ball after ball was thrown forward.

Jason Henry, operating in the wide areas, set up a couple of headed chances for Paul Vines, but both were wide of the mark. Another Aveley attack ended with Wixon’s header rattling Kings bar, but for the final ten minutes it was one way traffic with Paul Vines coming close with a couple of efforts that sandwiched a great attempt from Busy that Lunan pushed wide.

Perhaps unlucky not to rescue a point in the second half, but fortunate to have still been in touch at all after the first, was the verdict from the home team.