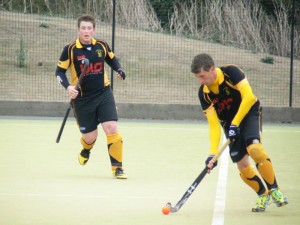 Mens I
Thurrock Men’s I 4 Wapping III 3
Thurrock made it two wins out of two games in this NE14HOCKEY Div 3 SE clash but it was not an easy game and they left it late to secure three points. The home side started well and were in total control scoring the first goal after only two minutes with captain Steve Abbott hiting the first goal by reacting the quickest after Matt Gaut hit the post to strike the ball in. Thurrock continued to dominate the game but after 15 minutes Wapping equalised with a scrappy goal on the break, then the visitors started to get back into the game and went 2-1 up just before half-time. Straight after they looked like they scored again only for Andre Rudder to make a dramatic goal line clearance. Just after half-time Gaut was brought down by the Wapping keeper and Abbott coolly scored from the resulting penalty flick, but he visitors struck back quickly to regain the lead. Thurrock started to pass the ball around trying to look for the equaliser which eventually came after Steve Edwards scored following a fantastic solo run, now both teams looked to win the game but with man of the match Jordon Salmon defending well Wapping struggled to make any chances, then Captain Steve Abbott secured all three points and his hat-trick.
Next week Thurrock travel to play another undefeated team Plashet, 10.30 start.

Despite their poor start to the season, Thurrock were in excellent form this weekend as they beat Colchester 4th team by two goals to one. The first half started with a spell of Thurrock possession before Colchester pegged them back into their own half and despite the best efforts of Jimmy Venus and Michael Fleming, Thurrock failed to capitalise on the counter attack and were unable to break the deadlock, going into the break at half time looking the much weaker team. At half time Ben Knowles was brought on and made an immediate impact from the back, running past two players on the left before being taken down by an opposing defender. Thurrock piled on the pressure and it wasn’t long before they broke the deadlock, Jimmy Venus had an exceptional volleyed goal disallowed just 10 minutes into the second half. Five minutes later, Liam Appleyard broke down the left again and delivered the ball to Jimmy Venus who struck the ball straight at Dave Shatwell to deflect it in, giving Thurrock the lead. Jimmy Venus got another assist to his name when he played the ball to Gary Venus from a short corner who pushed the ball into the back of the net. Thurrock were almost leading by three five minutes later when Gary Venus and Tom Madden exchanged a one-two, followed by a powerful shot from the top of the area by Tom Madden which the keeper palmed away. Colchester eventually started to dominate possession and got a goal back, but Gary Ginsberg and Rick Clubb were able to contain the forwards, and Keith Mager made a series of fantastic saves towards the end of the match which ensured that Thurrock were able to hang on to their lead for a well deserved victory.

Upminster IVs are the opposition next week at Palmers, 11 am start.

Last week Thurrock had to concede their first game in NE14HOCKEY Div 9 SE due to lack of players however in this game they showed that they were capable of a good season. From the start Thurrock mounted an attack and pressurised the visitors. After 10 minutes Michael Fleming collected a pass from George Horgan and hammered the ball into the net. Thurrock maintained their dominance and Fleming scored his second when he converted a penalty corner in the 22nd minute. 10 minutes later Liam Appleyard collected a clearance and left a string of defenders in his wake before flicking the ball into the net from the edge of the area. A change of formation in the second half proved fruitful and the visitors were much more threatening forcing the Thurrock defence to work hard to keep them at bay with debutant keeper Declan Salmon making a string of excellent saves. After 50 minutes a half cleared ball by Thurrock was seized upon by the speedy Colchester attacker who slipped the ball inside the post just beyond the outstretched boot of Salmon. Thurrock were spurred into life and began to regain control of the game with Ollie Smith and George Horgan linking together on the right to pull the visitors out of position before crossing to Liam Appleyard who selflessly passed for Tim Madden to score Thurrock’s fourth goal.

Thurrock’s tough start to the season continued with the visit of League leaders and promotion favourites Dereham. Tees got off to the worst possible start when Dereham were awarded a goal when the ball had clearly rebounded back off the wheel of the goal behind the back line for the Dereham forward to score. Their start was made worse when soon after the visitors scored their second goal leaving Thurrock with an uphill struggle for the rest of the game. The home side enjoyed a strong period of attacking play during the middle part of the first half and did have the ball in the back of the net from a penalty corner from Miriam Nichols, but the shot was just too high. At the end of the half, Dereham then scored another two quick goals to leave Tees 4-0 at half time. Thurrock started the second half with real purpose and a good move involving Jo Taylor and Katie Jacks led to Alison Bonner scoring with a first time shot. Unfortunately, Dereham’s strong forward play resulted in a further two goals later in the second half resulting in the final score at 6-1 to the visitors proving their title credentials for the East Premier Division this year. Player of the Match was Louise Pike.

This weekend Thurrock face yet another potentially difficult match away to West Herts .

This was our third match in the new higher league and the standard is of hockey is much better. However, Saturday’s result did not reflect the balance of play. A goalless first-half, which saw us have three short corners, was a fair score line.The second half could have gone either way. The referee awarded a Waltham Forest sideline hit from a ball that had clearly come off a their stick. They moved the ball quickly across the pitch and scored. Tees pressed forward with purpose and had chances with four short corners. Leaving ourselves short at the back as we chased the equaliser was our undoing, as Waltham Forest broke quickly and scored their second towards the end of the match.
With no substitutes to call upon, we have run out of gas in all three matches. We can be competitive at this level and finally a special mention for the defence and goalie on Saturday who looked strong throughout the opponents periods of pressure.