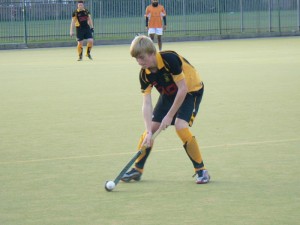 From start to finish the home side dominated the game. Thurrock struggled to cope with their accurate passing and movement off the ball. Plashet’s first goal came from what appeared to be a lifted ball outside the D, but they soon added another four goals before the half time whistle. Thurrock improved in the second half, with coach Andre Rudder demanding at least a consolation goal. With improved passing and more possession of the ball they were rewarded when James Beardwell fired in a low shot into the bottom left of the goal. Tee’s defence quelled most of the home side’s attacks with Man of the Match Jordon Salmon putting in some excellent tackles on skilful opponents.

Next Saturday’s game is away to Upminster II, 1 pm start.

Thurrock started well enough in their Division 6 match on Saturday morning, almost going a goal up after Michael Murray burst into the opposition’s D and drilled a shot just wide, but Upminster always looked the better side. Man of the match Gary Ginsburgh was doing well to control the opposition’s forward line for the first 15 minutes, but a sloppy hit out gifted the visitors their first goal, and it was all downhill until half time after that. 4-0 down starting the second half, Thurrock thought that a change of formation might help, but three goals in quick succession put paid to any optimism T’s had left. To be fair to Thurrock, when they played as a team and worked hard they were a match for the strong and well organised Upminster side, and pulled two goals back in the last quarter of the match through Jimmy Venus, and would have gone the last half hour without conceding but for a mix up in the dying minutes. A look at the table however shows that Thurrock are the only team to have scored against the top two teams in the division.

The 2s are away to Wapping on Saturday.

In the early stages of this NE14HOCKEY sponsored Division 9 SE game the home side dominated and the Thurrock defence had to work hard to reduce the pressure on keeper Declan Salmon. The rare Thurrock attacks were easily cut out by a determined Southend defence. After 20 minutes a Southend attack was thwarted by Liam Appleyard making his debut at right back and he carried the ball up the field before passing to Liam Birch who beat two defenders before passing to Michael Fleming who coolly slipped the ball past the advancing keeper. Thurrock were rejuvenated by the goal and they took command of the game with Matthew Skinner cutting out a string of threatening passes in midfield and providing ammunition for the forwards. Five minutes before half time Oli Smith made a break on the right wing before passing inside for Jim Venus to put slot the ball inside the post. In the second half Thurrock maintained their pressure and the Southend keeper was forced into making a string of last minute saves. Slowly Southend came back into the game and ex-Thurrock player George Horgan looked certain to score when he latched onto a through ball and dribbled through the Thurrock defence and went around Salmon however as he was about to shoot, Appleyard made an excellent tackle to take the ball away and send it back up the field for Lawrence Smith who passed for Fleming to shoot. Although the keeper managed save the ball Venus was on hand to knock the rebound into the net.

Next week Thurrock have an early game against local rivals Upminster who currently stand one place behind Thurrock on goal difference.

Thurrock were moments away from earning their first points of the season after a gutsy second half fight back. Tees started the game brightly, with Miriam Nichols going close with two strong runs and subsequent shots which were just wide. West Herts then enjoyed some good possession and only three great saves from Tees goalkeeper Alison Hadley kept the score at 0-0. Unfortunately the home side’s possession came to fruition when in the space of two first half minutes; they scored two goals to go in 2-0 up at half time. Thurrock began the second half in determined fashion and a strong run and inch perfect pass by Jo Taylor enabled Louise Pike to score. Thurrock then gained the upper hand and began pushing for an equaliser which soon came from a great through ball by Nichols which was well picked up in front of the goalkeeper and dispatched with confidence by Katie Jacks. Thurrock had thought they had done enough to achieve a well-earned draw, but a right at the end of the half a succession of harshly given penalty corners resulted in West Herts scoring with an excellent aerial effort. Thurrock did not have enough time to respond and lost the game 3-2. Player of the match was Louise Pike.

This weekend, Thurrock have a home game against Cambridge University at Palmers College, starting at 12.30 pm.

Brentwood II 1 – 0 Thurrock II
We fell to another defeat but yet again a gritty performance saw us go close on a number of occasions.There are no easy games in this league but we were again competitive.Some fifty fifty refereeing decisions did not go our way which led to much frustration from our players.But we are not being overrun and I am sure the corner will be turned soon.