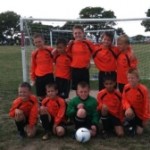 With 3 hat-tricks the Lions totally dominated this game .Its now 7 out of 7 with 29 goals scored and not one conceded

Despite leading twice St.Clere’s succumbed to league leaders Rippleway in awful conditions but should have had more reward for their efforts but were denied numerous penalties by the official

Despite leading 4 -0 at half-time St.Clere’s lost this game with Ongar scoring the winner in extra time

St.Clere’s U18 B were knocked out of the cup in awful conditions depsite a strike from O’Leary

St.Clere’s progress through to the semis with a second succesive hat-trick from Haydon