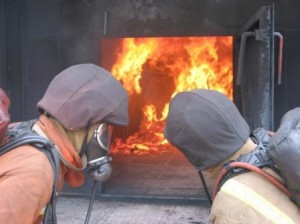 Essex fire crews have stepped up their industrial action from today (Monday 7th December) to include a ban on new individual secondary contracts and on new additional work agreements which do not conform to national conditions of service. The union accused managers of being incapable of reaching an agreement at a time when staff shortages are beginning to bite.

Fire crews had previously voted 8 to 10 in favour of lawful industrial action and since 26th August an overtime ban and other action short of strike has been solid. Last week the chief fire officer announced negotiations were ‘going nowhere’ but offered no hint as to how an agreement might be reached. The union said the agreed procedure for dealing with such a deadlock was to seek the assistance of national employers and union to help broker a deal.

The union has written to the fire authority today formally requesting such third party assistance and the agreed procedures clearly state that the other side should not unreasonably refuse. The union said the public comments of the chief officer were becoming increasingly ill-tempered and at times descended into little more than rants.

Last Monday the chief fire officer accused the union of deceit for not turning up to a meeting on Monday 30 November. In fact no meeting was organised. The meeting that was organised for Thursday 3 December was cancelled at short notice by managers.

Keith Flynn, FBU brigade secretary said: “The industrial action is being intensified and we remain very concerned about the impact the current cuts are already having. Last week the fire authority admitted for the first time there were already frontline shortages at fire stations.

“These shortages will be made even worse by the frontline cuts they have already started to push through which have seen the loss of 24 frontline firefighter posts at Harlow and Colchester. There are more cuts to come which will make matters worse again.

“No one is fooled by claims from senior managers that the service to the public is being improved by cuts. It is clear to frontline fire fighters that this is not the case.

“Local managers have said the negotiations have reached a dead end and so the agreed dispute resolution porcedures should now kick in. We have written to the fire authority today to kick off the process of bringing in outside assistance to resolve the dispute using the usual channels and we await the fire authority’s acceptance.

“I’d urge the fire authority to move on from ill-tempered and increasingly bizarre rants and seek help. The dispute will only be resolved by negotiation and the dispute will go on until an agreement is reached.”

The cuts mean frontline firefighters being spread more thinly across Essex and has also led to the controversial decision to downgrade the way special appliances like rescue tenders and aerial (high reach) appliances are crewed. On October 1, cuts in the number of firefighters at Colchester, Chelmsford and Harlow stations resulted in the removal of dedicated crews for specialist emergency vehicles.

The cuts mean there are only enough firefighters to crew three of the four appliances currently crewed at these fire stations (two fire engines and two specialist vehicles), even if they are all needed in a 999 emergency.

Similar plans affecting Leigh, Southend, Basildon and Grays fire stations are to be implemented sometime soon, but exactly when is yet to be announced. The union has also objected to a number of other changes which it says local managers are trying to impose rather than negotiate.