Stephen Metcalfe, MP for South Basildon & East Thurrock, has announced his support for the Lighter Later campaign at the Conservative Party Conference. 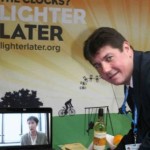 On 3rd December, The Daylight Saving Bill will be going to the House of Commons where MPs will debate whether or not the UK should make the shift. Most UK citizens support the move according to polls.

10:10’s Lighter Later campaign has been backing the move and represents a coalition of bodies from RoSPA (The Royal Society for the Prevention of Accidents) through to the Lawn Tennis Association.

Stephen added: “As the latest research shows, this low-cost, easily-implemented change has the potential to make us safer, happier and healthier.”

Stephen signalled his support for a Private Members Bill, and pledged to vote in favour of the Bill on 3rd December.

Constituents can find out more about the proposals at www.lighterlater.org