Pratchett at The Thameside 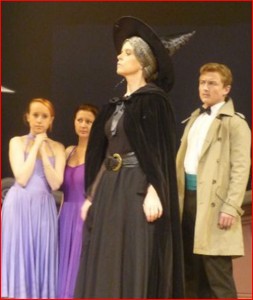 Maskerade is a novel by Terry Pratchett which has been adapted for the stage by Stephen Briggs but unfortunately for me “page to stage” does not seem to translate well and I personally found some areas of this play very difficult to follow although it is really just a case of Phantom of the Opera meets panto!

There were some great moments (along with some very poor ones) and it is these that I want to talk about here as I do not want to dwell on the negatives.

Mention has to be made of Karen Reeves who, for me, was the glue that held this production together. Her reappearance as Granny Weatherwax was on the button and it is difficult to believe that Karen has performed brilliantly in two other plays as two very different characters since she was last seen as this formidable witch in Wyrd Sisters this time last year. I loved Gary Patmore as Walter Plinge, a thinking man’s Frank Spencer. He had some really difficult manoeuvres to perform and did these brilliantly. A good believable performance. Well done! Vic Gray was marvellous as Mr Bucket and John Scowen, as the tenor Enrico Basilica, managed to bring the house down with just a gesture or a glance. The comedy timing between Martin Williams and Dave Carey as the two watchmen Corporal Nobby Nobbs and Sergeant Detritus was spot on and they produced a hilarious distraction to some of the more monotonous scenes. I also loved Martin’s Mr Salzella, musical director at the opera house.

The scenery was well thought out. I was impressed by the very slick scenery changes – there were quite a few!!!! I also thought the music was well chosen and very atmospheric in places and I also enjoyed the use of the auditorium for parts of several scenes.