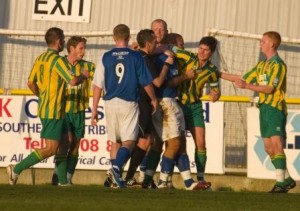 Bill Robinson reports from Ship Lane……
With four new debutants in the line up Thurrock’s manager was hoping to see a dramatic improvement in his team’s performance.

In the first half there was plenty of movement and the game was played at a fast pace with end to end action, Braintree came close to opening the scoring on 14 minutes when Sean Marks struck a shot from the edge of the box and hit the inside of the post and Thurrock cleared.

Scott Shulton then tested new keeper Charlie Mitten on 18 minutes with a fine drive form twenty yards and the keeper made a fine save.

Rob Swaine playing up front as centre forward had two headers well saved but was also helping out at the back as Thurrock continued to pack their defence when ever Braintree attacked.

Despite having all eleven players back defending a corner, Nicky Symons was still able to get a free header that was cleared by Kenny Clark.

An early second half injury to Kenny Clark (Brken Nose) saw Rob Swaine reverting back to centre half and Lee Roache coming on up front.

On 67 minutes Braintree broke the deadlock a cross from the left by Sam Holloway found Sean Marks running towards the near post and his header beat keeper Mitten.

Within sixty seconds the duo came close to repeating there move but this time Seam Marks header was down ward and bounced over the bar.

Three minutes later Marks did get the ball into the back of the net but the linesman’s flag ruled it offside.

Braintree where now rampant and pushing forward looking to seal the victory, on 84 minutes the second goal came from Sam Lechmere, his weaving run found him on the edge of the Thurrock box, his first shot was blocked but the ball came back to him and the second shot was low down and found the corner of the net.

With only seconds remaining a Braintree corner came over and found ex Thurrock player Matt Paine running into the box and his powerful diving header made it three nil to the visitors.

Thurrock still without a win and despite playing well for 67 minutes in a game of ninety minutes will need to start collecting points soon to avoid being cast adrift at the foot of the table.