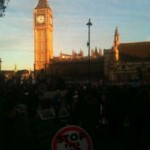 IF there was one abiding theme during the General Election coverage back in April, it was that students from the schools and colleges across the borough were going to give the Lib-Dems a chance.

So, it is no wonder that many Thurrock students have travelled to the Houses of Parliament to demonstrate against the tuition fees vote.

Jack said: “The atmosphere is one of anger and betrayal at the Lib-Dems. For many who voted for them in May, they feel cheated and wished they had voted Green or someone else.

“We just feel that Nick Clegg has been spineless”.

Other students from Thurrock were worried about the debts that they faced in the future.

A student who did not wish to be named said: “We’ve come but so many of our friends have simply decided not to go to university. Hardly any student in Thurrock go to univ. There will be even less now.”

We asked Jack what he thought of the police activity. He said: “I have seen small pockets of aggressive police officers, getting into protestors faces. I saw one grab a protestor by the face and throw him to the ground.”