Thirty car pile up on A13 as snow hits Thurrock again 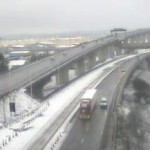 A THIRTY car pile up on the A13 near Corringham was just one of the problems for drivers and shoppers in Thurrock as the snow came back with a vengeance.

Firefighters dealt with a multi vehicle RTC which stretches over roughly a mile of the westbound carriageway of the A13 near Corringham.

The officer in charge reported that it was a multi-incident collision meaning that there are a number of different RTC on that stretch of road. Crews divided the road into sectors and were prioritising rescues.

Firefighters worked with colleagues from the Ambulance and Police Services.

Update: Firefighters released one woman who was trapped as a result of the collision. Using two sets of hydraulic cutting equipment they had released the woman by 14:07hrs. Firefighters also assisted with a number of motorists and passengers who had sustained injuries but were not trapped in their vehicles. The injured were left in the care of the ambulance service.

Christmas shoppers have been descending on Lakeside but some have reported traffic gridlocked while others have reported difficulties getting out again.

Arriva has now suspended all bus services in Thurrock as well as Southend, Rayleigh, Rochford and Basildon.

Essex Travel is reporting following problems in the area:

A126 Essex – Stationary traffic on A126 The Lakeside access road in West Thurrock between the A13 junction and The car Parks.

A128 Essex – Hazardous driving conditions on A128 between Orsett Cock in Orsett and Wilsons Corner in Brentwood, because of snow.

A1306 Essex – Hazardous driving conditions and long delays on A1306 Arterial Road West Thurrock in Lakeside at Thurrock Lakeside, because of snow.