Carlton receives MBE at the Palace

IT was a fantastic climax to the year when Carlton Darrell travelled to Buckingham Palace on the 17th December 2010 to receive his MBE from his Royal Highness Prince Charles in recognition for his “services to the community in Thurrock.” Carlton was accompanied to the investiture by his wife Jean, niece Levyette and close friend Gillian Moore. It was Carlton and Jean’s second visit to the Palace this year having also attended the Queen’s Royal Garden Party in June.

Carlton who is 71 and lives in Corringham, has worked tirelessly and selflessly for the youth in Thurrock over a 50 years period both in an educational and recreational role. Having taught at two Thurrock Primary Schools during his 35 years of teaching, Carlton coached and encouraged a host of champions in various sports. But it is the number of hours that he has given voluntarily to badminton in Thurrock that he is most famous for.

Bermudian born Carlton came to England in 1960 after completing his teachers training in Canada. He took up a teaching post with Woodside School and decided to start an evening badminton club for staff. Following that success he decided to see if he could teach his pupils the game. To his delight they not only enjoyed the game they also reached a good standard and eventually many excelled at it. Thurrock Badminton Club existed for adults only and being inspired by the success and interest at school, Carlton founded Thurrock Junior Badminton Club encouraging local youngsters to take up the sport.

Since then he has devoted countless unpaid hours to developing both junior and senior badminton in Thurrock and Essex and it is thanks to his efforts that Thurrock Badminton Club has been one of the most vibrant clubs in the Country over the last forty years. Carlton has coached innumerable teams and individuals with many of his players going on to represent Essex and also earning National and International honours.

In 1980 following 20 years at Woodside School and becoming their Deputy Head, he moved to Chadwell Primary School to take up the position of Head Teacher, a post he held until his retirement in 1995. During the early eighties Carlton coached Torells Secondary School Badminton Team to win the prestigious award of “Top School” in the country 3 years in succession, a truly remarkable achievement that Carlton himself is still extremely proud of.

In 2004, Carlton was recognised by Badminton England (the governing body for Badminton) for his contribution to the game by being awarded one of the highest accolades in the country “The Long Standing Exceptional Service to Badminton Award”.

Even though Carlton has dedicated his life to badminton and teaching he has still found time to become involved with other local organisations in Thurrock. He has been treasurer and a committee member of TRUST and helped form Thurrock Tigers FC of which he is still President, as well as being involved in many charity organisations.

These days Carlton can be found enjoying his days on the golf course at Langdon Hills Golf & Country Club where he is currently Senior Captain.
Carlton’s niece Levyette flew in especially from Bermuda for the investiture and said “all the family and friends in Bermuda are extremely proud, especially his three sisters” 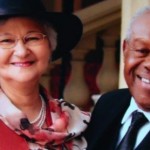 Carlton who celebrated after the ceremony with lunch at the Oxo Tower, a West End Show and a stay in the Savoy Hotel said “The day was absolutely fantastic – it was the best day of my life. It has been quite a year, one that will never be forgotten, I have lived my dreams!”