Windy Win! Thurrock produced a gutsy performance in blustery conditions to record a 2-1 victory against Havering in the Essex league that takes them to second in the table.

The game was always going to be difficult due to the swirling wind and with Thurrock losing the toss and kicking down-hill in the first half, they knew they had to go into half time with a comfortable goal advantage. Thurrock started in exactly the way they finished last week’s game; lots of focus and determination. This element of their game, which has been missing in previous matches was evident from the first whistle. Thurrock dominated the first half with some good efforts to combat the weather conditions and played some good football. This was rewarded when Kyle Brand (Warren) powered a shot into the Havering net to put Thurrock into the lead. Further pressure was rewarded when Flynn Astbury (St Joseph’s) doubled Thurrock’s lead with a well taken shot on the edge of the penalty area. 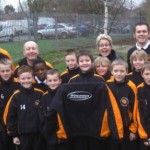 a free kick mid-way into the Thurrock half. The referee signalled that this would be the last kick-off the game. The ball was whipped in and looked goal bound only for captain Harry Haysom (Dilkes) to produce a victory saving header and provide three points for Thurrock in the search for the Essex League Title.