Councillor appalled at “lack of action” to prevent tyre fire

By Staff Reporter on February 1, 20113 Comments 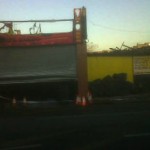 Little Thurrocks Conservative Councillor, Rob Gledhill, has expressed his anger at a lack prompt action from Thurrock Council in relation to the tyre fitting operation in Whitehall Lane.

Rob said “I first contacted the Council during one of my ward walks last year when I saw mountains of tyres stacked several metres high both inside and on the street.

“Despite voicing my deep concern for public safety a number of times, nothing was done until the first week in January when I was told that officers would investigate if they had permission to operate. I was also assured the tyres would be cleared within a fortnight.”

He added “On Thursday 27th I again asked what action had been taken and was told that the owner had been asked to fill in a planning questionnaire to establish use.

I was then appalled that, despite voicing my fears for public safety, officers appeared more concerned that the tyres were stacked neatly rather than removed!

After I heard about the fire I visited the scene and was more shocked to see that some of the remaining tyres were still stacked up on the street and in addition others had been stacked outside residents homes. I feel that residents and businesses have been let down and deserve to know why appropriate action had not been taken so I have insisted the Chief Executive carry out an investigation immediately.”