Magnificent Redding boxer of the night

First to box was Kieran Wright who came against Connor O’Riley from Barking A.B.C. Youngster Wright gave a spirited and gutsy performance but lost the bout on a points decision.

Next up was Levi Lee who boxed against Devon Scott-Waller from the Rumbles Academy in Sittingbourne.

In the first round Lee attempted to prize open the tight defence of the taller Kent boy. Lee was picking his shots nicely against Scott-Waller. The first round was boxed on even terms with Lee appearing to be slightly ahead by landing several clear point scoring shots. In the second round they continued the fast action packed pace with the bout remaining level. Lee stepped up the pace in the third round and once again appeared to be landing the cleaner shots. However the Kent judges turned in a majority decision in the Kent boxers favour.

Kieran Redding also had a fast paced bout with Jack Raines from The Rumbles Academy in Sittingbourne. 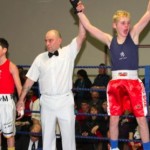 Redding was awarded Essex boxer of the evening.

Chadwell St Mary hosts an Open Show at the Gateway Academy on Saturday 19th February doors open at 6.45 Tickets available on the door at £12.00 per Adult £6.00 Children/O.A.P’S Liscenced Bar Available. All support for the local boxers is much appreciated.